After my day in Tübingen, I had to get ready for a night out with my colleague, Wolfgang and his friends. He asked me Friday night if I would be interested in joining him and some people Saturday night enjoying the game, Kegel. Now, I had never heard of Kegel but I was sure interested in going out and having a good time so I said yes to that quick and jumped on that bandwagon.

Wollie (nickname) came at exactly 5:45pm and off we were to Eglosheim. I have to say that he is a really sweet man. He reminds me of Tobias, with a wonderful disposition and kind heart. Something I find hard to capture in people these days.

After arriving at the club, we went downstairs to some small room where the Kegel alleys were awaiting. I had never played or heard of this game before but I was intrigued and interested. 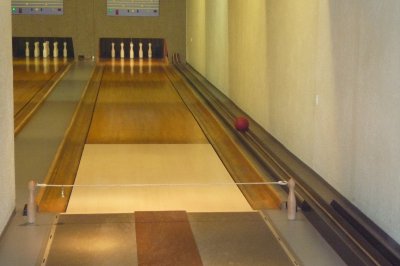 Don't ask me to explain how it is played as there are several different games to go through and half the time I just followed what they were doing because Wollie tried to explain to me what the game was but half was in German, half in English and most of the time I spent looking at his lips trying to understand what he was saying.

In the end, it was great fun and I enjoyed myself emmensly. Good people and good, clean fun. 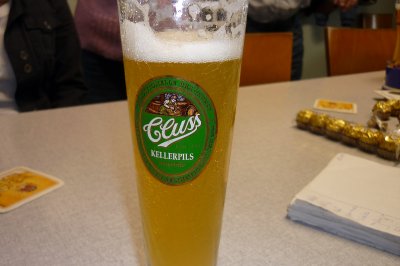 <- my first drink of the night
During the game, we had to drink a spirit for some reason.

I have to tell you, I was gagging once again. 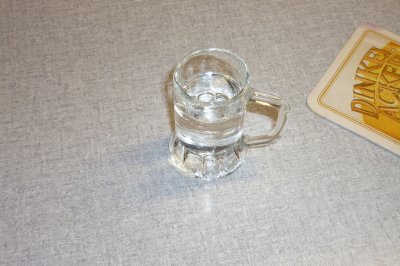 This was even worst than Stuttgarter beer and that shit is just vile! I did manage to swig back the spirit in the name of fun as it is customary at all games. I did mention before in this blog that Germans love a good drink right?

After the game it was time to eat. We tried to eat at the club but the wait for food was over an hour due to some sort of party arriving with 20 or more people. It was no problem as this small town had a few other cute restaurants within walking distance of the Kegel center.

Pics on the walk 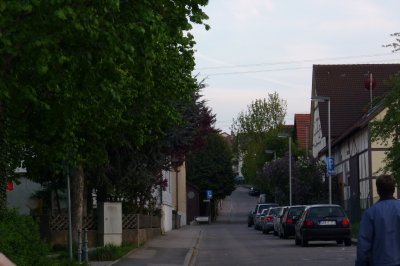 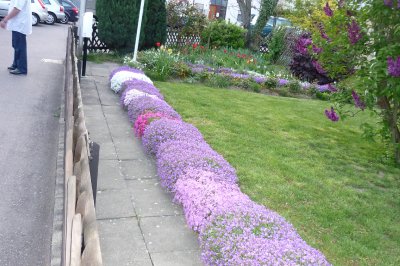 W settled on Greek food that night. Of course the meal started off the ouzo. Once again, it left a hot hole in my chest as it made its way down. Then it was onto the main meal. I had lamb with big white beans. Yum! The meal was completed with more drink, this time schnapps. That shit was fantastic. 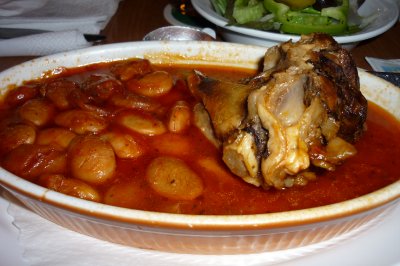 After chatting, laughing and closing down the restaurant, we called it a night. Wollie brought me home and drove through a different section of Kornwestheim, a part I didn't know existed. A part that was actually open after 6pm! Most of the town where I live is locked off at 6 so to see cafes, stores and bars open after 1am was refreshing and inspiring. Hopefully I will make it to this section of town for a look see one of these days.

At the hotel, I quickly crashed as I was exhausted after my stressful week and packed day. But, I was up early the next day to explore Residenzschloss in Ludwigsburg, better know as the Swabian Versailles. 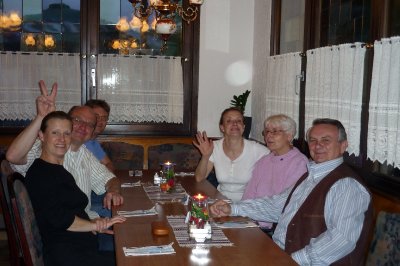 ...what in the hell were you thinking? Being a home body, thinking Canada, Ontario, GTA was the center of the world was so, beyond, wrong!! You should have explored more, taken a lot more risks, had more fun, looked at other avenues offered instead of what others considered as "right". Is it too late for my current self? I don't think so....but if I had done more younger I would have had a hell lot more fun and maybe been happier.

The above is a note that I wrote to my younger, extremely conservative self. I don't know what possessed me to stay at home and think that the world ended in my little comforts zone. I remember that while my friends were off exploring different things I sat tight lipped at home unwilling to explore new avenues of life. Now, the more I read things, the more I see more, the more I explore different possibilites, the more I know I made huge mistakes!

Can I rectify them now? Is it too late? For those of you who know me personally, this message will not be crytic (as I am sure some readers are like, what the hell?) but instead of being confused, I feel that I know exactly what I want and how to get it. Well, that part is not as clear but I do have "means" in the palm of my hands. It is just a matter of using these resources and making some life altering steps.

Am I ready for them? Damn right I am! I have wasted enough time as it is so.....it is full steam ahead starting today. My visions are clear. No more sitting on the sidelines and looking from the inside out, I want to be all up and through there!!!

Saturday morning found me on a train headed the small university town of Tübingen.

I was advised by Tobias that this was a nice little city with a small old town and great shopping so off I went. Taking the train was easy as usual once I got to the Stuttgart hbf. I am so getting used to the modes of travel around here. It is really easy once you get it so finding the correct platforms and trains is all but a breeze for me now. The train ride was a little over one hour and in that time I mostly slept and looked out the window. This train was pretty much empty so it was a relaxing interlude.

Once I got to Tübingen the fist thing that attracted me was a small body of water I saw from the train. I had to check that out. Once off the train, I slowly made my way around looking for things of interest. I happened upon a flee market but didn't shop as the stuff looked like old crap.

So, I kept walking and saw a few buildings of the university. Looks like other university buildings to me.

I decided to head to the old town & marketplatz but was easily distracted by the river nearby. This mini lake was a basin for the Neckar River which looked so calm and peaceful. Many people, looked like locals, were out by the water enjoying cups of coffee and espresso or strolling along the walkway. I decided to do the same and enjoy the serenity of it all.

The marketplatz was abuzz was people and a real contrast to the nearby lake. There were many shops and food vendors open.

Just like any open air market, you can buy anything from food to art. It was really nice but packed! Of course I couldn't resist and bought a cute dress. It had to to be done.

Tübingen is known for its antique shops so I took a gander into a few shops but nothing caught my eye. Thoughts of carrying extra weight home in my luggage kept popping into my head and deterred me. So, I walked and walked and walked. Took many a photo and enjoyed my time here.

Work and life was a bit hectic last week so this voyage into serenity was blissful.

After the old town, I stopped for a sandwich and an chocolate gelato (not feeling it) and sat in a pretty park.

I don't know the name but I knew it was tranquil and capped off this part of my day.

Before heading to the train, I wandered around more and came upon another small park. The people in this park were a bit.....suspicious at best...but I had a positive attitude and kept on keeping on. I said Guten Tag to a few people as I passed them and took my pictures and basked in the hot sun.

The train ride home was a different experience than coming to Tübingen. It was relatively quiet until we stopped at Plochingen, and oh my gosh, it was mayhem! The train was rammed pack with people who were all drinking either bound for the frühlingsfest or the stadium for the soccer match between Frankfurt and Stuttgart (we won!!). I was happily sleeping only to be rudely awaken by loud, loud talking and laughing, the girl beside me almost spilling her beer on me and the general buzz of a lot of people in a small space. I actually started to laugh as this was exciting and fun to me. I wished I was going to the soccer game too.

Once at the hbf, I was once again bombarded by people going to Bad Cannstatt for the festival and game. The polizei were out in full force that night with their heavy bullet proof jackets and stern faces. I can only imagine the foolishness that goes on at the soccer stadium. But, I wanted to be part of that foolishness as soccer games or games in general are always fun experiences.

Once back in Kornwestheim I took a nap (muchly needed) and got ready for my night out of Kegel and Greek fare.

Someone gave me some really excellent advise and I had to pass it on. I think it might be well known but it has been vital for me.......

Never have expectations therefore, you are never disappointed

I am now applying these words to all aspect of my life and in this short time that I have implemented them, it seems to be paying off.